Owing to the widespread anonymity that characterizes ancient artistic production, few individual artists can be easily identified. The “Master of Apollo,” for example, is an artist whose name remains unknown. Scholars have nevertheless been able to recognize him on the basis of his exceptional artistic skills and to associate him with a school.

We are standing in front of a large terracotta statue which retains much of its original color, as seen in the contrasting brown of the skin and white of the clothes, which are also trimmed in black. Indeed, even if we are not accustomed to imagining it, ancient works of art were originally vividly colored.

This is the god Apollo represented with that particular grin known as the archaic smile, which serves to accentuate the expression of the face. He walks decisively to the left. What is he preparing to do? Is he trying to reach somebody?

Barefoot the god advances with left arm menacingly outstretched and the other lowered, perhaps because he held a bow. In order to understand his pose, it is necessary to look at the Apollo in relation to the statue in front of him.

The latter represents Heracles who has just captured the golden-horned hind sacred to Artemis. This is one of the twelve labors which the hero had to accomplish in order to atone for having killed his wife and children in a fit of madness. This explains the rage of the god Apollo, who is preparing to fight Heracles and free the hind sacred to his sister. 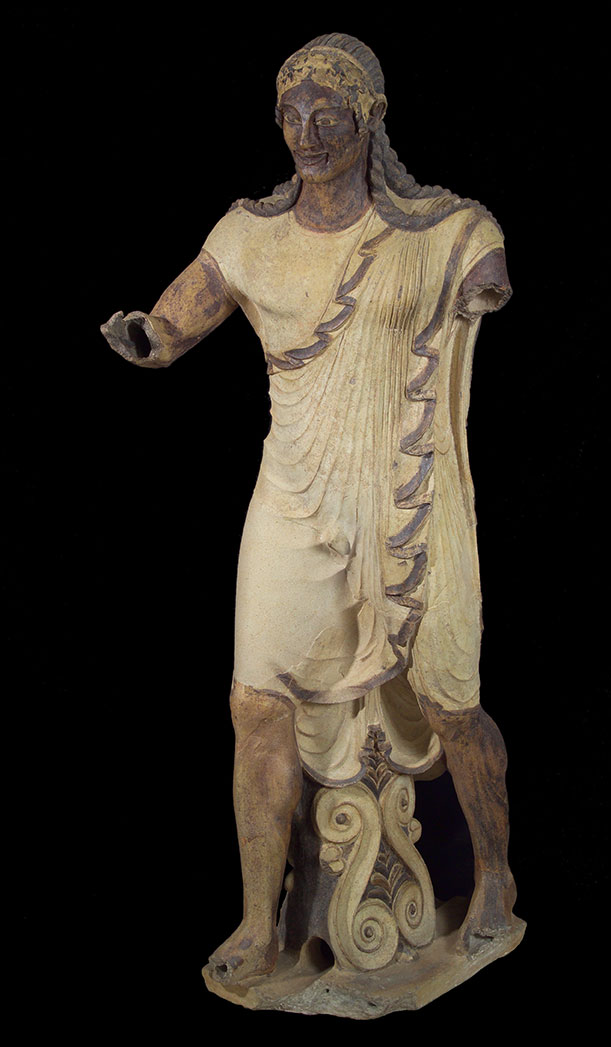 In addition to Apollo and Heracles, Artemis, the goddess from whom the hind had been stolen, and Mercury, represented as the peacemaker, played integral roles in the same mythological scene. The head of Mercury is on display in the same room.

These and other statues – among which Leto with the infant Apollo in her arms stands out – were intended to decorate the top of the roof (columen) of the temple in the Portonaccio sanctuary at Veii. The temple was dedicated to the Etruscan goddess Menerva (the Greek Athena) and dates to the end of the 6th century BCE.

The terracotta figural decoration of this temple is exceptional among other examples from the ancient world for its richness and quality.

In May 1916, the statue of Apollo, along with fragments of other statues, was found in a votive deposit broken into several pieces. These were carefully arranged in alignment with an embankment, as attested by an archive photo, suggesting the reverence afforded the statue by those who decided to bury it.

The Portonaccio statues have been attributed to the “Master of Apollo,” an artist from Veii who belonged to the last generation of clay sculptors (coroplasts) working in the circle of the famous craftsman named Vulca. Ancient sources mention the latter as the creator of the celebrated statue of Jupiter commissioned by the first Etruscan king, Tarquinius Priscus, and dedicated in the temple sacred to the Capitoline triad (ca. 580 BCE) on the Capitoline Hill in Rome.

Shortly after the creation of the Portonaccio statues, the last king of Rome, Tarquinius Superbus, commissioned two (?) quadrigas to decorate the roof of the Capitolium from the Veientine workshop of the “Master of Apollo.”