Cases in which it is possible to document and recover a nearly intact pediment of the classical period are extremely rare in Etruria. Given that all the remains of such pediments known to date are more recent, the Pyrgi pediment is a work of extraordinary importance, both in terms of the place where it was found (the sanctuary at the port of Cerveteri) and its subject matter.

We are now standing in front of the façade of an ancient Etruscan temple observing the decoration of its pediment. This work of art is made of painted terracotta, but only small patches of the original color are preserved.

Restoration of the relief meant the reassembling of over 2000 fragments. Once buried beneath the earth, the relief was damaged by a farmer’s plow, which was the cause of its discovery and the start of excavations.

The scenes depicted are exceptionally lively and also violent. They are connected to the story of two brothers who fought over the throne of the important Greek city of Thebes, each brother assisted by his own band of followers. Yet neither will be victorious, and they will end up killing each other.

The myth represented is that of the “Seven against Thebes,” the subject of important tragedies. The myth recounts the contest between two twins, Eteocles and Polynices, sons of Oedipus, for the throne of Thebes. The two should have taken turns reigning, but Eteocles refuses to return the kingdom to his brother, and Polynices along with seven heroes attacks Thebes.

In the lower part of the central scene we see one of Polynices’ supporters, Tydeus, in the midst of brutally biting the head of the Theban Melanippus. This horrible act provokes the disgust of Athena, recognizable in the background on the left, who recoils and hides the ampule of immortality that would have saved him.

To the right, Capaneus, having succeeded in scaling the walls of Thebes, dares to curse the gods and is struck by the lightning bolt of Zeus, who looms over the other figures in the center of the pediment. 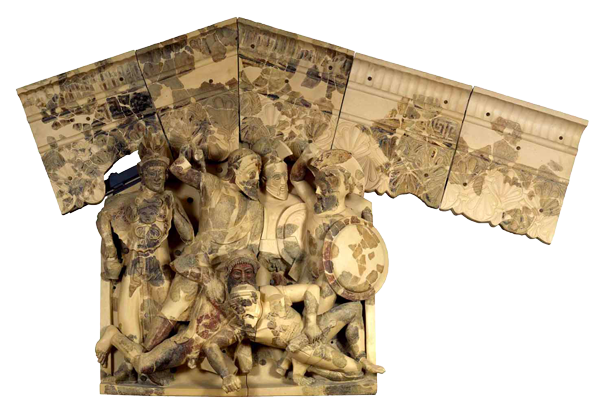 In the first half of the 5th century BCE, an Etruscan artist synthesized with great flourish the tale of fratricidal conflict, from which no victor will emerge, rendering perfectly in clay that which the Greek called kairos (καιρός), the “right moment” in which the fate of a person in decided. At the same time, the ideals of civilization are exalted in the face of barbarism, represented by the naked, bestial figures of Tydeus and Capaneus, who through their behavior showed contempt toward the gods and the laws of man, thereby committing the sin of hybris (ὕβρις).

This work of art testifies to the skilled craftsmanship of the Etruscans in the realm of working clay (i.e. the coroplastic arts), who molded not only reliefs, but also statues and sarcophagi. Clay, thanks to its malleability, allows the artist to create works of strong chiaroscuro capable of imbuing the subject with immediacy through three dimensions.

The pedimental relief comes from Temple A at Pyrgi, which many scholars believe was consecrated to the goddess Leucothea, the “white goddess,” whom the Romans associated with Mater Matuta, a goddess closely connected to rites of passage and transition, such as birth and the rising of the sun.

In 1996, the relief was the subject of an impressive restoration campaign, which despite the fragmentary state of the piece, resulted in a full reconstruction and comprehensive interpretation of the mythic iconography.

Simultaneous with the pediment’s construction was the staging of the same myth in Athens by Aeschylus in his Seven Against Thebes. Certain variations in the myth observable on the pediment, however, allow us to connect it more closely with the work of a Greek poet of the previous century, Stesichorus, who was active in Sicily. This demonstrates the profound literary knowledge of the Etruscans, who were able not only to interpret, but also refashion for their own artistic and ideological aims the mythic imagination of the Greeks.