Sarcophagus of the Spouses

It is a masterpiece known throughout the world. The spouses look at us, speak to us, make us ask questions. Their embrace evokes a story of love and touches peoples’ hearts.

What we see is an enigmatic smile. In reality, it is a convention of ancient art known as the archaic smile: the artist sought not to reproduce a human smile but to accentuate facial expressions.

The eyes are now empty, but originally their hollowed out surfaces must have contained color: black and white. Even if it is hard for us to imagine, ancient works of art were once vividly colored. In the Museum, one can see many other works that preserve traces of color.

The two figures are represented in a tender embrace as they prepare to drink some wine together, a beautiful moment from everyday life that the artist wished to extend even into the afterlife. It is a scene of life and at the same time intimacy depicted on a sarcophagus that contained the remains of the deceased, who are portrayed as though they had never died.

The positioning of the hands suggests the presence of objects now lost: she perhaps was anointing herself with an unguent, an act which had funerary significance, while he may have held in his hand some garlands or a cup.

Among the Etruscans, it was normal for women to participate in the banquet as equals of their male counterparts in terms of rights and dignity, something which was not permissible among the Greeks. 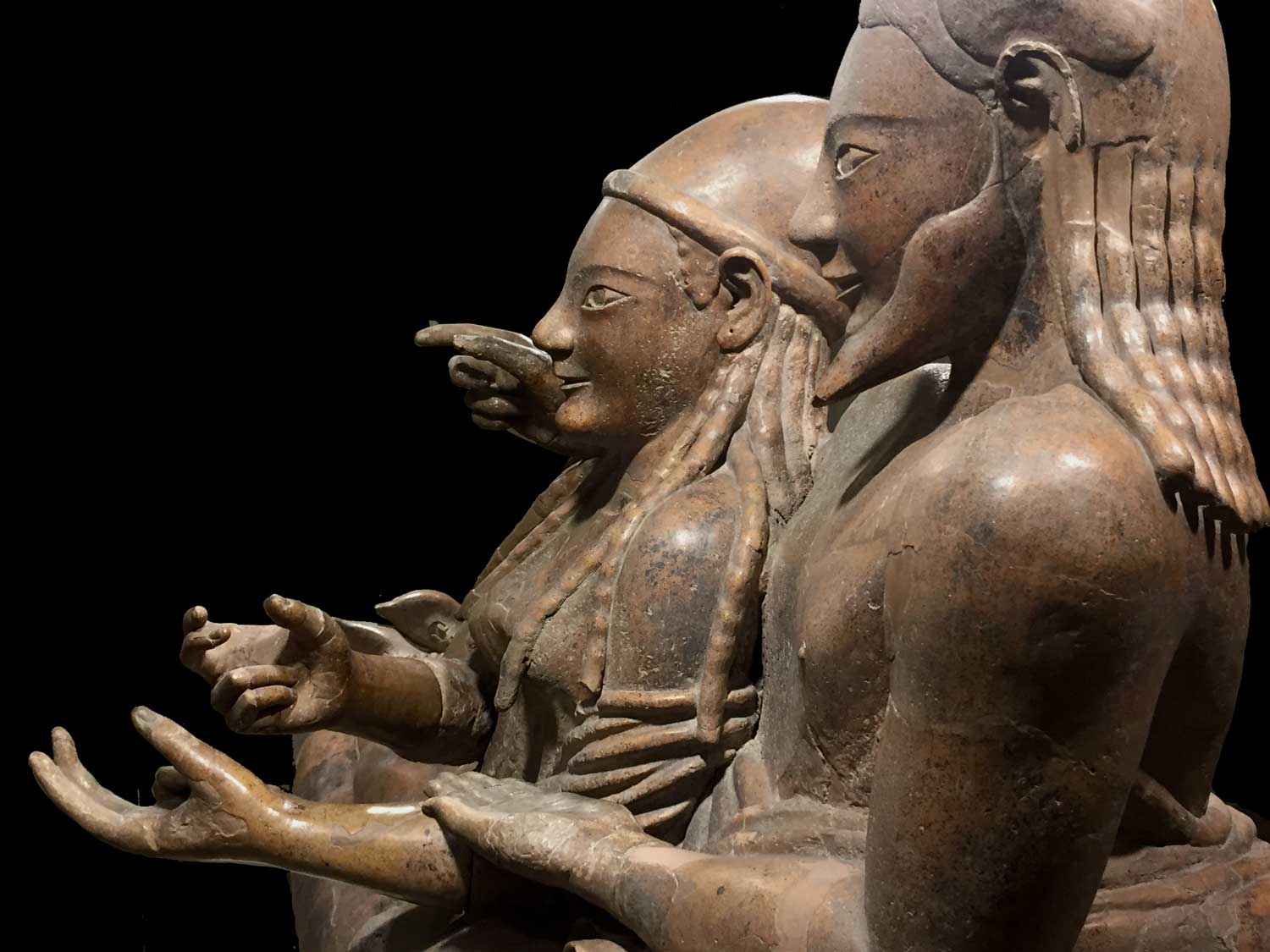 The Mediterranean world of the second half of the 6th century BCE was turned upside down by events not so different from those that are still causing instability today.

Asia Minor (modern-day Turkey) at the time was busy dealing with the advance of the Persians, who forced the Greeks of Phocaea, long-time residents of the Ionian coast, to relocate to the west. Some headed to a place which they had been frequenting for some time and where decades earlier they had founded colonies, including Marseille; others, in particular artisans, were welcomed by the Etruscans.

To them we must give credit for the cultural and artistic transmission that gave rise to the first painted tombs in Tarquinia, painted terracotta plaques, and the Sarcophagus of the Spouses – an extraordinary testament to the strong affinities which bound the Etruscans and Greeks for the duration of their history.

The sarcophagus, made of fired clay, was discovered in 1881 in 400 fragments in the Banditaccia necropolis in Cerveteri. A single comparable piece is known, which is now on display at the Louvre.

The quality of the details is such that we can observe numerous aspects of the clothing and manners of the symposiasts. In particular, we may note the woman’s headdress, the characteristic Etruscan tutulus, and her shoes, the so-called calcei repandi, a type of footwear with a pointed toe bent upwards, clearly reflecting eastern fashion trends.

The artist’s ability to conquer space is extraordinary, particularly the way in which he extends the gestures of the spouses into the viewers’ space. The tender embrace of the spouses is so moving that it hardly requires explanation in order to arouse the emotions.