Extremely rare are bilingual texts featuring Etruscan. The discovery of the gold tablets was of extraordinary importance for advancing our understanding of the Etruscan language.

Housed within the museum are three important gold tablets, on which brief texts written in languages no longer spoken have been inscribed: two in the Etruscan language, the third in Phoenician.

They are in perfect condition for being more than 2500 years old. This is due to the fact that they were rolled up and buried with great care in order to protect them.

Some gold nails found with the tablets probably served to affix them to a doorframe, as a series of holes in the tablets demonstrates.

The three tablets were folded up and hidden away in a container. They present two texts inscribed in Etruscan and one in Phoenician, the language of the city of Carthage and its colonies.

A few decades before these tablets were inscribed, the inhabitants of Phocaea (a city on the coast of modern-day Turkey), in flight from the Persians, clashed with the joint Carthaginian-Etruscan fleet at Aleria in Corsica.

Herodotus recounts that the Phocaeans won, but they were so reduced in number that they were forced to seek refuge in Campania, where after several setbacks they founded the city of Velia. Carthaginians and Etruscans divided control of the Tyrrhenian Sea. These bilingual tablets affirm the close relationship between these peoples. 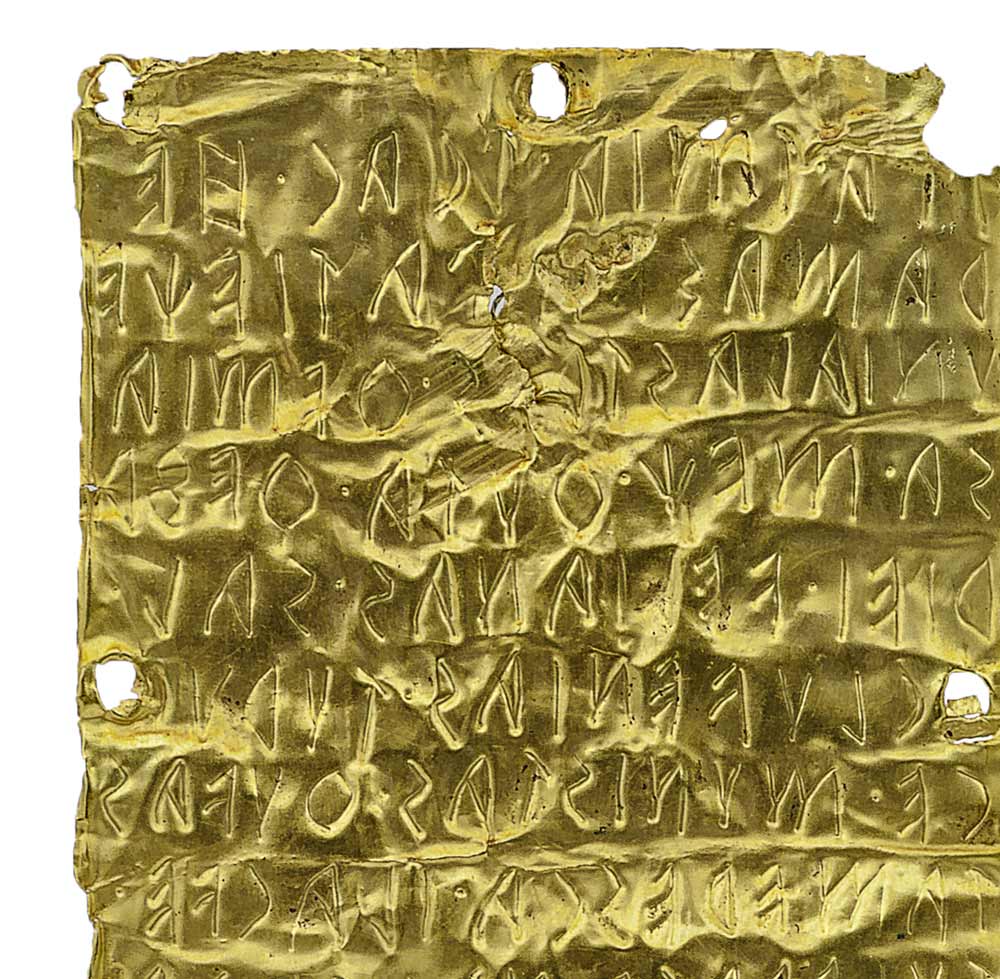 Dating to the end of the 6th century BCE, the tablets are considered the most ancient direct historical sources among surviving inscriptions from pre-Roman Italy.

Due to the imperfect correspondence between the Etruscan and Phoenician texts and because of their brevity, the Pyrgi Tablets are not comparable to the famous Rosetta Stone, which permitted the near total decipherment of Egyptian hieroglyphs, but have nonetheless contributed to the advancement of our understanding of the Etruscan language.

The discovery of the Pyrgi tablets, which occurred on 8 July 1964, represents one of the most important events in 20th-century Italian archaeology and is due to Massimo Pallottino, founder of modern Etruscology.

The tablets record that Thefarie Velianas, designated the king of Caere in the Phoenician text, dedicates a “sacred place” to the goddess Astarte, Uni for the Etruscans. On a historical level, the dedication in Phoenician on the part of Thefarie serves as clear confirmation of the close bonds linking the Etruscans and Carthaginians from the time of the Battle of Aleria (ca. 540 BCE), a period of great expansion for Carthage in the Mediterranean.