A rare example of masterful execution, formal beauty, and cultural historic value coming together in a single archaeological find, the piece constitutes a particularly fascinating source of evidence.

The beautiful female head was incorporated into a larger relief which decorated the façade of an Etruscan temple.

The head is made of painted terracotta and even retains traces of its original color, including the white of the skin, black of the pupils, and red of the hair.

The open mouth, large wide open eyes, and windswept hair seem to express a sense of fear and a desire to flee.

The head comes from Temple A in the sanctuary at Pyrgi (Santa Severa), the ancient port of Caere (Cerveteri) and represents the goddess Leucothea (literally the “white goddess”), to whom Greek sources claim the temple was dedicated.

A Greek legend recounts how Ino (as the goddess was known when still a mortal woman), after the death of her sister Semele, raised the infant Dionysus, her nephew, provoking the wrath of Hera, who detested the baby as the offspring of one of her husband Zeus’ many affairs.

The poet Ovid (Fasti 6) tells how Ino-Leucothea, pursued by Hera, eventually arrived at the mouth of the Tiber in the territory of the Arcadians with her son Melicertes-Palaemon. Here she was helped by Hercules returning from one of his labors. 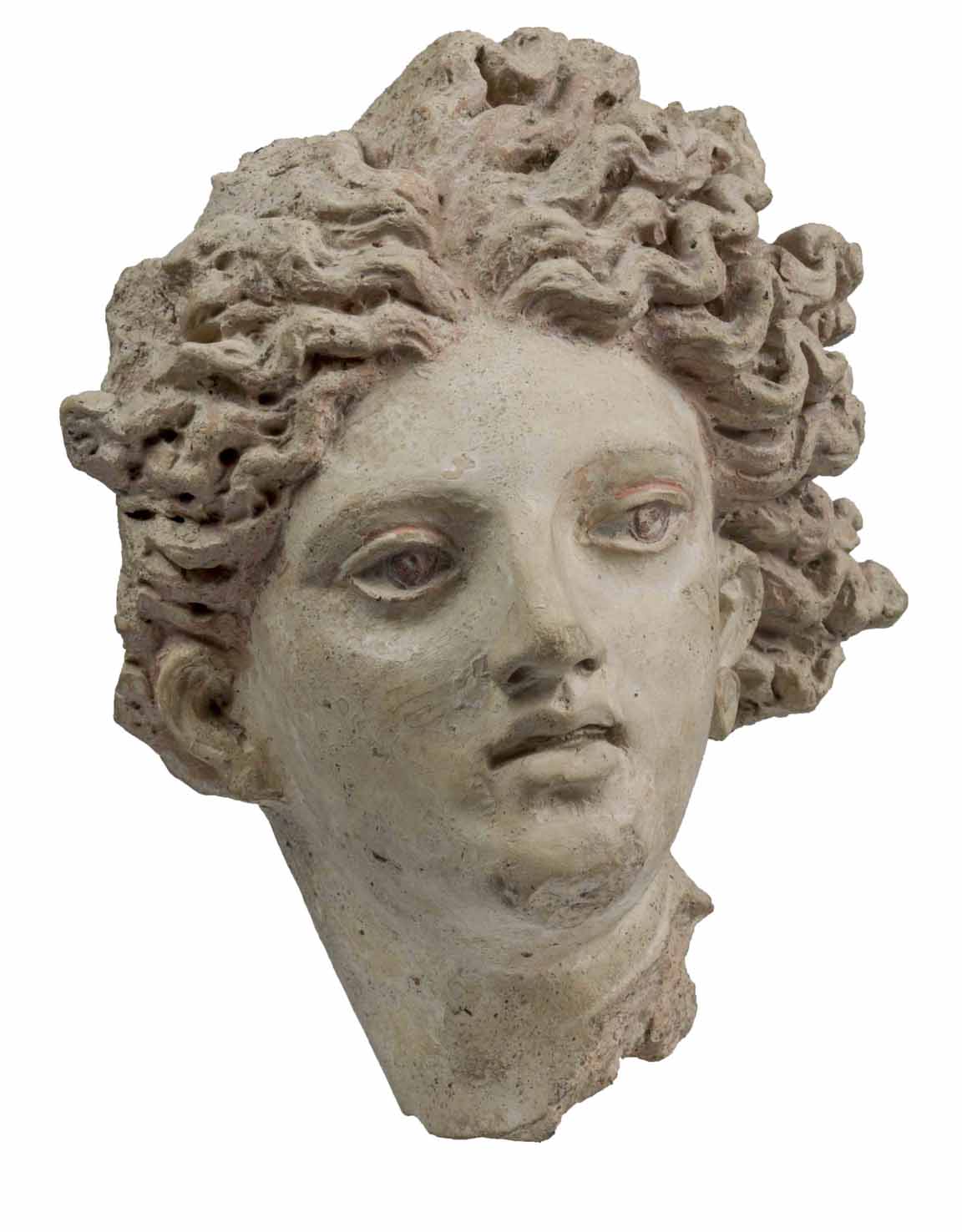 According to Ovid, the priestess Carmenta, mother of Evander, king of the Arcadians, had foretold to Ino that she would become a marine divinity called Leucothea, that the Romans would assimilate her to Mater Matuta, goddess of birth and the dawn, and that her some Palaemon (Roman Portunus) would be venerated as a god of ports.

In fact, in the vicinity of the Forum Boarium in Rome near the city’s ancient river port, where the Temple of Mater Matuta once stood, a temple dedicated to the god Portunus was constructed, which is still visible a short distance from the Tiber.

Found in the 1960s, the head belongs to a remodel (datable to around 350 BCE) of the decorative program of Temple A at Pyrgi, which was constructed in the second half of the 5th century BCE (470-460 BCE) and dedicated, as attested by an inscription, to Thesan, the Etruscan goddess of the dawn, later identified with the Greek Leucothea.

The renovation of the temple is likely to be connected with the sacking of the sanctuary in 384 BCE, an act attributed to Dionysius the Elder of Syracuse by several Greek sources, which also record the particularly high value of the booty extracted by the assailants.

The execution of the head recalls the Late Classical style of Greek sculptors such as Praxiteles and Skopas (second half of the 4th century), whose art is characterized by particularly listless, sympathetic postures and by the accentuated movement of the figures.